A Barrel of Laughs

My blogging has fallen by the wayside with the onset of the holiday season. For me that starts with Halloween, and this year it actually started early because we got Frequent Fear passes to Universal's Halloween Horror Nights. But that merits a post of its own, so I will give it one later.

In the meantime, we had some sorrow at Duloc Manor. I lost my cockatiel, Bradley, who I owned for nearly 15 years. Bradley traveled with us to two different houses in Illinois and then from Chicago to Celebration. I remember how terrified I was that he was going to catch a chill on that long, bitter cold January drive when we got caught in the Atlanta ice storm. His cage was wedged in the back of Canyonero and heavily covered with blankets. That night, the expressway was closed down due to accidents on the asphalt-turned-ice-rink, and I was worried about poor little Brad isolated all by himself in the back of the car. But as the sun rose, he broke into his cheery little morning chirping and I knew that he was fine.

He took to Duloc Manor immediately and took over the family room couch. He was a rather cranky old man, but then again he was cranky even in his youth. He wasn't hand tamed when I bought him, so it was a long and painful process to teach him to be handled. I made it through the bloody bites and he eventually gave in and tolerated my touch. But he was never a cuddly, lovely dovey bird. Even though he liked to fly over and sit on my shoulder or knee, he'd chomp me if I dared to move.

Here is the feathered crank: 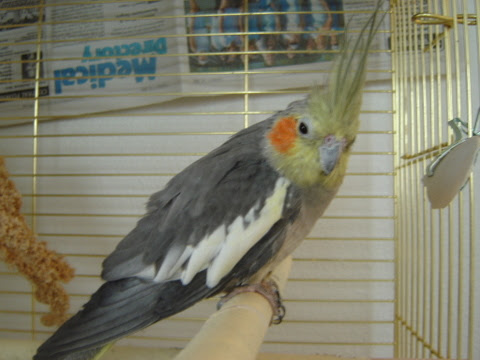 I left Bradley fully flighted because I figured that if I clipped his wings, he'd be no match for the feline duo. Actually he got along fine with Tooncinator and Stitch. He and Stitch would sit together on the couch, and he often got into bitch slapping/biting matches with Toonce. It was all in fun...Toonce would do a little paw bat and Brad would chomp back at him. Slap, bite, slap, bite...they would go back and forth until they got bored.

But Farquaad is a born hunter, and he and Bradley shared an uneasy truce that was subject to breaking at any time. Brad would sit with me on the couch, and Quaad would try to sneak up on him. But his belled collar would give him away, and Brad would whirl around and do a war dance. It was a riot to see the little lump of feathers doing his spread-winging, hissing threat to a 20 pound cat. I could almost hear him taunting, "Nya nya! Mommy's here so you can't do anything!"

Brad's cage was left open 24/7 except when we were on vacation, as he never went anywhere but the couch or his cage-top jungle gym. I think he enjoyed the freedom, but after 15 years of no problems his wings were finally his undoing.

I was bringing in the step ladder from outside when I heard the familiar sound of a bird heading at me full speed. Unfortunately, it happened too fast for me to take the proper action. I was closing the door as I heard it, but I didn't realize that Bradley had managed to fly around it and outside. It's always been his habit to fly down the hall and circle, so I'm sure he tried to circle around this time too. But the door was already closed, so he must have hit it, panicked, and flown off to goodness knows where.

I was hoping he had hit the door inside and fallen somewhere in the house. No such luck. We searched futilely for several days, but my dear, sweet little Bradley was gone. As bad luck would have it, he disappeared at the same time that we had a wicked cold snap. Even if he could figure out how to eat something other than Nutriphase seeds, he surely would have succumbed to the cold.

Birds are a lot of work, so I always used to say that when Bradley died, I'd retire from avian pet keeping. But I always thought he'd be around for another 5 years at least. Now that he was gone so abruptly, the house was much too quiet. I missed his good morning squawks and his cheery greetings whenever we walked in the door. I missed having a birdy companion as I worked at night. I decided that the best way to put closure to his loss was to get another bird.

I've always wanted a quaker parrot, so I was torn between that and another tiel. I called around and located a place called Chief's Bird Cabin in Orlando that had both (as well as just about any other bird you can imagine). Thus we started off on a long I-4 journey to the other side of the city to add a new family member.

There were two little quakers in a cage. The shopkeeper grabbed one and handed it to me; the poor little disoriented critter snuggled in my arms and climbed up on my shoulder. He was so cute! I went to the tiel cage, but there was no way I could look at them. Memories of Bradley poured back into my mind, and I could feel the grief rising. No, if I was going to get another bird, it had to be something completely different.

The little quaker seemed good natured, so I didn't both to look at the other one. I bought him, along with a plethora of toys and treats, and hubby was relegated to hold the little birdy container as we navigated the special hell of I-4 to get back home.

I was contemplating a literary name. My cockatiel was actually named after Ray Bradbury, my favorite author. Bradbury didn't really roll off the tongue, so I corrupted it into Bradley.

But as I was considering, my husband said, "What are you going to name him? Truman?"

He was referred to the name that almost became Stitch's. Before he ended up at the animal shelter, Stitch had been found in a field in the suburb of Burbank. That immediately brought to my mind the name Truman Burbank (Jim Carrey) of "Truman Show" fame.

But because Stitch's cage was marked that he was not for adoption, I couldn't help but name him after the blue alien that had been in the same situation. Besides, Truman was a little too close to Toonce's name, and I didn't want to confuse the cats when I called them. I latched onto Truman for the bird, since it meant that I didn't have to think any further.

Finally we made it home; I was half convinced that the bird was dead, since he had been totally silent. Thankfully he was still alive and kicking when we let him out in the kitchen.

I had cleaned Bradley's cage, so I festooned it with the new quaker toys. I had also bought a new cage top jungle gym, hoping that the new little bird would love it as much as my old tiel had. Truman was unceremoniously plopped into his new home, and I could tell that he would much rather be back at the shop with his birdy friend than surrounded by two baby-talking humans and three furry predators ready for the kill.

At least he was able to take comfort in his Happy Hut, a tent-like thing that you hang in the cage. Apparently they think it's like a nest, and it becomes their safe zone. Here is Truman holed up in his: 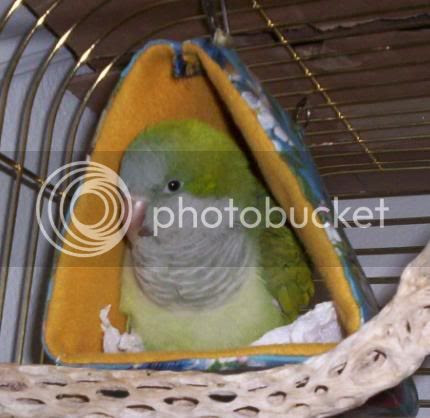 Truman is still not thrilled with his new circumstance, but he is slowly giving in. Like the Borg, we will eventually assimilate him. Poor little critter doesn't stand a chance.

Stitch has already greeted him, and Toonce has tried to play the slap game but Tru wants no part of it. Quaad new immediately that he was a different bird, and you could tell he was hoping that this new avian wasn't under the protection of the humans like Bradley was. I have finally convinced him that it's not acceptable to eat his little birdy "brother."

I soon discovered that Truman is narcopleptic. Bradley must have had some owl in his lineage because he always stayed up late with me. Actually I think he was probably dozing, but he always hung out on the couch until I went to bed. Then he would reluctantly fly back to his cage and turn in for the night.

Truman puts himself to bed in his Happy Hut by 6 p.m. every night. He cuddles in and immediately sleeps like the dead for the next 12-14 hours. Here I thought I'd have evening company again, but sadly I am a night person stuck with a stictly daytime loving bird.

Quakers are supposed to be prolific talkers, but thus far all I've heard from Tru is a semi-recognizable version of hello. He does seem to be mumbling other things, but he hasn't said anything else clearly yet.

That all changed today as I was working and he was perched on his play gym. Suddenly I heard a string of sounds that at first made me think, "Is he imitating a chicken?" He kept it up, and it clicked with me that he was imitating something. Another click: He was laughing! Every day I watch the court shows (Judge Mathis, Peoples Court, et. al.), and the audiences tend to do a lot of laughing. Tru had taken it upon himself to chuckle and guffaw along with them. Once I paid close attention, I realized that my silly green bundle of feathers was saying, "Hee hee hee! Ha ha ha!"

Hopefully this means he's going to be talking and mocking a lot more sounds. I just know he's going to come out with a meow someday soon, since he's constantly subjected to Quaad's siren calls at breakfast and dinnertime.

In the meantime, I have a birdy barrel of laughs every afternoon. I'm still mourning my sweet little Bradley, but it helps a lot to have Truman. When I hear that "Hee hee hee! Ha ha ha!", I just can't help but smile.
Posted by Barb at 1:41 PM No comments: