The Aviary Comes to Visit

Normally Duloc Manor has a good bit of animal life. Three cats and a quaker parrot make for a lively mix. But for this week it's a bit more like an aviary, or perhaps a zoo. Friends of mine headed off to D.C. for the inauguration, so they dropped off their two eclectus, two cockatiels, and one sun conure, as well as their little dog. Truman has stayed at their place while I'm on vacation, so now it was his turn to play host.

If you're not familiar with eclectus, they are parrots that act more like puppy dogs. All of the birds are trained to wear diapers, so they can pretty much wander around (I diaper Truman occasionally, but most of the time he hangs out on top of his cage so he's usually naked).

The Ekkies, two brothers named Milo and Otis, had no trouble settling in at all. For the first day, to allow them to get used to the place, I set up a "play zone" inside a large dog cage, complete with bird gym, toys to chew, and the like, and put it near their cage. They moved back and forth between the play area and their home base, having a lot of fun as you can see in the photo below: Meanwhile Roscoe the dog, who is very old and deaf but still lively, had some sniffing time with the cats. Tooncinator was hiding under the bed as usual, discussing the state of the world with the voices in his head, but Farquaad and Stitch had to give their visitor the once-over. They like to sniff him thoroughly, then find a way to ensure that they're higher than him at all times, like lying on the coffee table. They'll read down and bat him with a paw as he goes by. They never claw him, but I guess it's just a dominance thing.

Unlike Truman, who stays up till the wee hours with me, the aviary goes to bed around 5:30 or 6. I cover them and move them into the front room, where it's relatively dark and quiet. By 8 a.m. they are rarin' to go, so I give them their food and move them back out into the family room a little later, opening their cage doors so they can run or fly around.

On Day One, the conure and tiels were rather flightly and didn't want to come out much. On the morning of Day Two, they were still the same way. Hubby and I diapered the Ekkies so they could wander around and left the other three closed in since they huddled in the back of the cage when we opened their door. The Ekkies promptly exerted their dominance, climbing to the top of the other two cages to play "King of the Mountain": 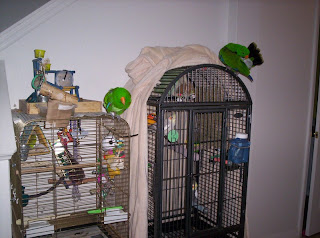 Truman's cage is on the left, but you can barely see him because he's hiding in his hut. The other three are on the right.

Later, with Milo and Otis on my shoulders, I opened the other cage door and the conure, Zazu, suddenly decided that coming out is fun after all. He flew right onto my arm, and the cockatiels followed in a feathered explosion. Now they seem to have decided that their new habitat is okay, even tho' there are two predators lurking around. Stitch pretty much ignores them. Farquaad would dearly love to eat them, but he knows all bird life is off limits. That doesn't stop him from creeping along, trying to be sneaky, before I noticed and yell at him. Then he gives me the innocent "I was going to do anything" Puss-In-Boots eyes.

Right now, the biggest challenge is keeping the two big guys from stealing the smaller birds' food. They love to sneak into the other cages and start feasting. It's like keeping an eye on two active toddlers. They both have a wide vocabulary, which they tend to say in my friend's voice. It can be a bit disconcerting to hear "her" saying, "Hello!" "Hey, Otis!" and "Peek-A-Boo." The conure talks, too. I've heard him say his name and one or two other things. The cockatiels will whistle songs when the mood strikes them, but mostly they just whistle randomly.

It's a bit like "Wild Kingdom," but the birds are a lot of fun. Truman is slightly jealous but not too much so. For the most part, he just goes through his regular routine except when the Ekkies try to sneak up on him. Then he does a bit of growling, not that it intimidates them in the least. I always thought Duloc Manor was lively with the usual resident critters, but once the menagerie is gone, it's going to seem like a ghost town!
Posted by Barb at 9:30 AM No comments:

We welcomed in 2009 with a bang at the fireworks display in downtown Celebration. Having spent most of my life shivering through Chicago Decembers and Januarys where even sticking your nose out the door would be an insane idea, I still marvel at the fact that Floridian New Years celebrations are outdoors affairs repleat with sparklers, firecrackers, and bottle rockets. If you go to the theme parks, or in this case downtown Celebration, you can also see a show worthy of the Fourth of July.

Our plans had a bit of a last minute change. The friend who was planning to host the annual shindig had a tragedy crop up shortly before the holiday. The festivities shifted to Duloc Manor, which would still allow us easy access to downtown. Hubby and I dutifully prepared, trying to beat the cat hair down to a dull roar (one of our friends is allergic) and stocking up on snacks at Publix. Our guests were bringing lasagna for dinner, but we figured the munchies might set in later so we got staples like Chex Mix and a lunch meat and cheese tray for late-night noshing.

The crew arrived around 7:30 p.m., and the began to flow almost immediately. After dinner we broke out the board games and started off with Apples to Apples, always a party favorite. It's the sort of game that warped minds (especially drunk warped minds) can turned into a shockingly depraved experience. Then we switched to Malarky, which we'd never played before. It turned out to be even crazier than Apples to Apples. Basically there is a question, and one player secretly gets the right answer while the others get instructions to bluff. Then everyone votes on who they think is telling the truth.

This may sound like a simple concept, but when you put five creative and slightly crazy minds togther, the results are...well...let's just say that wine was snorted out of noses before the night was over. I don't generally think of my husband as a creative person (he's the stereotypical quiet, droll computer programmer type), but he was in the thick of things. The best moments came when he drew right answers that were so stupid they actually sounded wrong. And not only wrong, but like they were made up in desperation. We all laid into him for not coming up with something better, but lo and behold he had the last laugh.

I felt sorry for our friends' daughter, who was trying to watch TV in the same room with the rowdy, guffawing adults. It's pretty sad when a kid has to keep telling the adults to be quiet! Truman, our quaker parrot, was thrilled to see their other daughter as he had bonded with her while they babysat him during one of our cruises. He spent most of the evening snuggled up against her shoulder.

We headed downtown around 11:15, figuring that it might take a while to find a parking spot. Thankfully we had one teetotalling member of the pack to handle the driving duties. We didn't even attempt to park close by. Surprisingly, we managed to park in a good and relatively easy to get out of area. We made our way to the lakefront, where our friend's daughter had linked up with one of her friends. We had smuggled in a bottle of champagne (we had no idea glass bottles weren't allow till we got there), so we had a quick round before the countdown began. The fireworks show started promptly at midnight, and I have to say that it was very well choreographed to the music. It was long, too...probably a good 20 minutes. The only annoyance was someone who apparently thought he needed to share his cigar work with all the rest of us. People were standing shoulder to shoulder, yet he thought it was a good time to light up a stogie. It's not like people can easily move because a) it's jam packed; and b) they're trying to enjoy the show. Everyone around us was waving the air and hiding their noses in their shirts. I don't know what brand Mr. Rude was smoking, but it stunk like taking a clod of my horse's manure and wrapping it in moldy, rancid tobacco leaves. If someone is dumb enough to inhale that mess, I guess they're also dumb enough to think others will like to "share the wealth."

After the fireworks, we sat around for a while longer. There was another hour's worth of music, although workers started picking up the tables and chairs almost before the last explosion had echoed across the late. I felt like we were intruding to still be occupying a spot. Finally we headed to the car, marveling at the vicious traffic snarl. We were far enough away to make getting home relatively painless.

Back at Duloc Manor, it was time for Round Two of the food and the game. Things got even crazier, fueled by a bottle of champagne that was probably large enough to accommodate the whole block. The counselor in me kept imagining my friends' daughters sharing stories about New Years Eve 2009 with a therapist someday. Finally they headed out to the hot tub, leaving us to revel in our insanity.

We all ran out of gas around 4 a.m. Fortunately we've got futons, as well as the couch and love seat, so there was plenty of room for bodies to collapse at strategic places around the house. By 4:30 everyone was reasonably well tucked in.

I think the first bodies started to stir around 10:30 a.m. the next morning. By 11, all eyes were open...perhaps a little blearly, but open. I infused myself with coffee, wishing there was a way to mainline it. One of our friends helped hubby whip up a breakfast (brunch?) of Bisquick pancakes and scrambled eggs. We fueled up and kibitzed a bit before the party finally broke up.

For me, it still hasn't sunk in that a new year has begun. I'm sure it's partially because the final weeks of the year were spent frantically finishing up my book. Once I finally hit "send" on the deadline, December 31, life became anticlimatic. Over the next few days I'll shift into "new year" mode. I'll try to exercise more, continue with my avoidance of in-house snacks, and work on getting book contract #2. For now, I just need to recover from the wild revelry of New Years Eve 2009.