Mickey Mouse is My Neighbor

Well, I've finally done it. I've long wanted to adapt my Celebration, FL, blog into a book, and I finally released the eBook on Amazon for Kindle and Barnes & Noble for Nook. If you read my blog regularly, you'll already know the stories of stalking Davy Jones, fighting rampant Florida wildlife, visiting the nudist camp, and the like. I took my favorite blog entries for the first two years, edited them a bit, and put them together into an easy package. 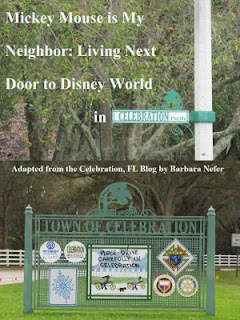 As I worked on the book, I was amazed at how much has changed since I started this blog back in 2004. I lamented about how the proposed condos would worsen the parking problems downtown and how, at the time, there was no viable solution on the table. Guess what? Parking is even more of a nightmare, particularly during special events, and no solution ever materialized. Worse yet, the housing bubble burst just in time to burn pretty much everyone who bought those condos.

I also lamented about Water Tower Place. Little did I know that the failure of Goodings and the initial store closures were just the start of a dizzying revolving door of businesses that opened and closed shortly thereafter, sometimes literally overnight. Hopefully the coming of Publix will give that story a happy ending.

Celebration is a much different town now. Many of the old special events are gone, but the fake leaves and snow still fall on Market Street and we still have some pretty cool happenings. Our town isn't nearly as pristine as it once was. Just about every street, including mine, has at least one obvious foreclosure. We also had our first official murder and a horribly tragic incident involving police barricades and a suicide. Both of those incidents made national news because, of course, we're the "Disney Town," and things like that shouldn't happen here. In reality, I'm amazed that it took for long for major tragedy to touch us.

Our little town, nestled just outside of Disney World, is all grown up now, with the attendant woes of adolescence and adulthood. There's still no place I'd rather be, and I'm already wondering what I'll think when I look back on this period in my blog a few years down the road. I hope I'm still as happy here then as I still am now.
Posted by Barb at 9:22 AM

Congratulations on this great achievement, many years in the making. I can't believe how fast time has flown since you began this heartfelt story. I'll have to pick up a copy for my Kindle to thank you for the joy you've brought to me, living vicariously through your tales. All the best of luck with the book!

Great post! Have not seen you post online re any DCL cruises. Will you be cruising this year with Disney? Are you sailing on the exciting Fantasy Maiden Voyage, Hawaii and New York cruises?

I've been following you posts for quite a while (although I had to catch up recently because I thought you had given up.)

As an VERY old cast member of Disneyland, I think I like Walt Disney World better! Especially since it is more accessible from South Carolina where we live.

We have wanted to move to Celebration ever since it's inception, and now that prices have dropped considerably, it's become closer to a reality.

Thank you for all your invaluable information and insight, and we may bump into you in the real world (not just the cyber one.)

Also; Congratulations on your new book.

Well, I guess your hibernating again. Missing your posts.

I posted a comment a few weeks ago, so I hope this one will show up.

Not hibernating, but work is crazy (in a good way). I have some blog post ideas that I'll be getting out there soon.

Good to hear. Busy is always a good thing; vs. under-utilized.

We are starting to finalize our plans for moving to Celebration, and we find your blog invaluable. The present housing prices are making this possible.

Thanks,
Cast Member from the 60's

Thank you for writing this book. Great info. We're moving soon there from NV. Thanks again, and all the best to you and your hubby. Rosalina

I followed your blog, and just finished the book on my Kindle. I am so glad to see that you are blogging again. I visit Clelebration everytime I am in Florida, Thank You for bringing Celebration into our homes!!