The Cult of the Black Cat

As I wrote yesterday, my husband and I went to Disney's Hollywood Studios for one last taste of Christmas in the form of the Osborne Family Spectacle of Dancing Lights. I don't like to go right around the holidays, since I'm not fond of feeling like I'm being smooshed like a pancake in the midst of a massive press of humanity akin to Times Square on New Years Eve. Granted, there were still a lot of people, since some of the marathon runners who were down for the event this weekend wandered over, but it was only a miniature mob scene.

There are so many wonderful additions to the Osborne Family Spectacle of Dancing Lights this year. I'm sad that its originator, Jennings Osborne of Arkansas, passed away earlier this year and didn't see the latest incarnation. When he started decorating his home Clark Griswold style many, many years ago, and eventually sent his millions of lights to Disney World to avoid being chased out of the neighborhood by pitchfork and torch wielding neighbors, I'm sure he never imagined what the display would grow into. This year, in addition to solid sheets of LED lights covering the buildings and just about everything else possible, there's a canopy of dancing lights and screens inside some of the building's window playing animated scenes. Every now and then, a soft snowfall drifts down on the dazzled people below.

It's hard to walk steadily through the Osborne lights because people keep stopping abruptly in front of you. You'll see their heads cock like the RCA Victor dog as their attention goes first one way, then another. You can almost hear their brains chanting, "Shiny!" before they burst from sheer sensory overload.

My favorite part this year was the canopy, which kicks into high gear every few minutes when the lights perform their "dancing" to music by such luminaries as the Trans Siberian Orchestra. Some of the dances are subtle, but my favorites are vicious, flashing, strobing disco shows that make people drop like flies around me as they go into epileptic fits. I don't consider it a successful visit to the Osborne lights unless at least half a dozen people drop to the ground, frothing at the mouth from the light show's intensity as the bulbs pound off and on to the hellish beat.

Of course, not all of the songs have the same effect as a Pokemon cartoon. There are jaunty but tame ditties, like Jose Feliciano's "Feliz Navidad," that are done in a calm and clever way. Every time the words "I want to wish you a Merry Christmas" blared from the loundspeaks, the words on the banner stretched across the street, that says Merry Christmas, would light up its words in perfect timing. A red LED heart in a "peace, love, and Mickey" decoration pulsed with the "from the bottom of my heart" lyrics.

We had one last thing to do before we officially put Christmas 2011 out of its misery. We had to gawk at the famous black cat, hidden each year among the Osborne light display. As I explained in my previous blog entry, the cat was originally sent from the Osborne's household in error along with the original Christmas shipment. He was dutifully erected with the other lights, and now he's hidden in a new spot every year so hard-core fans can ferret him out. You can see his 2011 spot below: 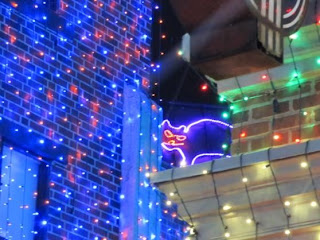 I thought we might be the only ones gaping at him that night, but there were plenty of others. We stood on the curb, craning our heads back and forth to get the best possible view, since he's in a very tricky position. Then we noticed other people heading over to the same area, squinting up at the building tops until they had their "Aha, there he is!" moments. We even commiserated with some of them on the sneaky hiding spot, since you pretty much have to look on an angle and it's hard to see his whole body at one time. I realized that we were something of a spiritual fraternity: The Cult of the Black Cat, seeking out a bit of Disney trivia just for those in the know.

I wonder how many black cats there have been over the years. I doubt the original one could still be functional, and if that's the case, thank goodness Disney continued the tradition with a duplicate. I never realized that so many people were members of the Cult of the Black Cat until last night. Now I know there would be countless disappointed fans if he ever went away for good.
Posted by Barb at 2:12 PM

WDW should create another LED canopy like this one at Osborne Lights and place it at Epcot in front of the Christmas tree where the "Lights of Winter" holiday arches used to be. It would look amazing between the tree and dancing fountain. With all your contacts is there someone you can suggest that too?