Yes, That Car Costs More Than My House

Duloc Manor is a modest place. It's a cute little triplex with plenty of space for me, my husband, our assorted cats, and bird. We luckily bought it before the real estate bubble had its nuclear bust and plunged people who were once awash in excess equity into the depths of Upside Down Mortgage Hell. It's worth about the same now as when we bought it, which is a big positive in these dark recession days.

Today, hubby had a chance to drive a sweet Lamborghini Superleggera (pictured below) at the media preview of the new Exotic Driving Experience at Disney World: 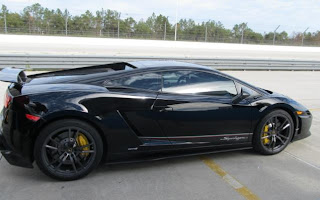 The experience kicks off officially on Jan. 16 at the Walt Disney World Speedway, which is also the longtime home of the Richard Petty Driving Experience. You can still drive a NASCAR vehicle if you want pure speed, but now you can book a few rounds in a Lamborghini, Ferrari, Porsche, or Audi and feel a combination of land-flight on the straightaway and superior handling on a new course addition.

Prices start at $199, although the car my husband tried costs $339 to drive. Out of curiosity, I looked up its MSRP online, and it starts at $260,000. Yes, that gorgeous hunk of sports car costs over a quarter of a million dollars. If I sold Duloc Manor right now for market price, I'd still have to rustle up some big bucks to put that baby in my garage. Oh wait, I wouldn't have a garage anymore! Still, I'd look pretty cool living in it over in the parking lot near Publix where all the truck cabs and campers hang out.

The Porsche, which is the $199 car, is a relative bargain-basement vehicle with a $100,500 purchase price. That's still pretty rich for the blood of someone who drives a four-year-old Saturn Vue and who makes the car dealers cringe when she whips out her paperwork and boldly declares, "I'll pay you a little over invoice, but I won't pay for the overpriced tint and pinstripes, so you're going to have to throw them it in since they're already on the car. That ridiculous rip-off 'dealer fee' had better be deducted somewhere in the paperwork, and don't whine that you're not making any money when I know you get a holdback."

Still, even though I'm an automotive miser when it comes to my personal vehicle, I can certainly admire the power and majesty of high-end exotic cars that would do a dozen rings around my sputtering Vue before I could even press the accelerator.

I let my husband drive the Lamborghini today because he didn't get to go to Mainstreet in Motion last year. Mainstreet in Motion is a massive test drive at Epcot, sponsored by GM but featuring cars from a wide variety of manufacturers. I got to drive a muscle car there, although the short course, set up in the parking lot, didn't give me space to really open it up. Hubby was able make the Lamborghini show its stuff, since the Exotic Driving Experience uses part of the existing speedway track to feel the raw speed, as well as a new addition where you can test the handling.

I posted a video of hubby's ride experience in my Examiner column. I'll admit to feeling just a bit jealous as I watched him whip around the course, but he's a die-hard NASCAR fan so I figured he'd have the most appreciation. I know there's a big difference between race cars and exotics, but with guys it usually still comes down to speed, and the exotic cars at Disney have plenty of that.

Now we're back at home, slumming it at Duloc Manor. Just down World Drive, there's well over a million dollars worth of automotive luxury waiting to welcome the first paying riders on Monday. The kids have Autopia at the Magic Kingdom and Test Track at Epcot, and now the "big kids" have a car ride, too.
Posted by Barb at 3:24 PM